Flippers Arcade in Grandy, NC has announced that they are going to have a Spring tournament on April 25, 2015.  The only available details right now are that they will have an A division and a B division for less experienced players.  Flippers is hoping to be included in next years PAPA Circuit.  In order to do that, they need at least forty people to attend the tournament this year.

Flippers does a great job running their tournaments and is an amazing arcade.  They have almost all, if not all, the modern Stern machines as well as A and B list Bally/Williams titles.   The machines are all in excellent condition and play very well.

This is an IFPA sanctioned event which will award WPPR points as well as North Carolina State points.  There will be cash prizes and trophies awarded.

Flip This 2014 was held this past weekend by Taylor.  Many members of River City Flippers were in attendance.  There were also players who came down from Northern Virginia and some players who came up from North Carolina.  As usual, Taylor’s machines were playing very well and were set to the hardest settings.

Both tournaments were eligible for IFPA WPPR points.

As usual, it was a very fun tournament that was followed by some cash game action until the wee hours.

Thanks to Taylor for a great tournament. 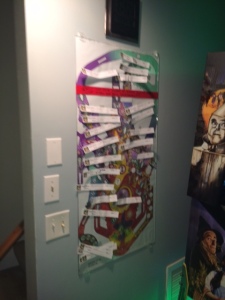 Wizard of Oz side tournament entries. 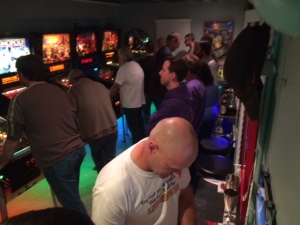 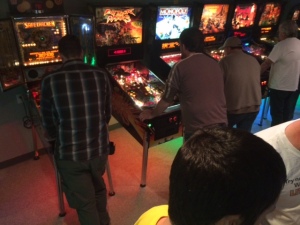 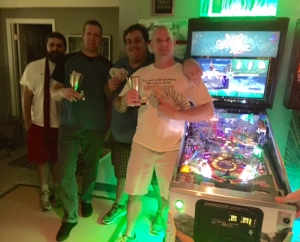 The full results were as follows:

Joe Said is a damn good pinball player and nice guy too.  He posted to his website clubpinball.com about a player going into suppressed status with the IFPA.  The idea of suppressed status was news to me.  Apparently, a player can be registered with the IFPA and receive WPPR points when entering sanctioned tournaments, but not have the points earned listed publicly and not participate in the ranking system.

As the player involved stated, he is creating a points black hole.  If a suppressed player enters a tournament and wins second place, the points awarded for second place will be awarded to that player, but will not be listed with the IFPA because the player’s status is suppressed.  This affects the remainder of the players in the tournament as these points are not able to be earned by other players – the black hole.

Should a suppressed player be allowed to participate in an IFPA sanctioned tournament?  I think all IFPA tournaments are open to IFPA and non-IFPA members.  In order to receive points toward an IFPA ranking, a player has to register with the IFPA.

If you look at it from this perspective, a suppressed player affects a tournament the way a non-IFPA member would affect a tournament.  This seems like it would not be a big deal until you consider that the suppressed player may be a highly ranked and highly skilled player whose suppressed status can have a big impact on the tournament difficulty and the points that are available to be won by the other participants.

Since there appear to be only 20 or so suppressed players, it is not a big or widespread issue from an IFPA standpoint, but it is interesting to consider it as a way to opt out of the ranking system while retaining the ability to impact the ranking system.

Pingolf is a pinball tournament format that requires a certain achievement on each machine played in the tournament.  The achievement could be a scoring achievement, a mode start a combination or something else. Like golf, low score wins.

I have been looking around, but have not been able to find scoring suggestions listed for many machines.

I am trying to figure out the best scoring for the following line up.  I am thinking about the following, but would like to hear any suggestions.

A week or so ago, I sent one of our league t-shirts to John Popadiuk.  When he got it, he posted this image on https://www.facebook.com/pages/The-Pinball-Inventor/208420082535873.  Thanks for helping us spread RCF far and wide!

Dadofducks on youtube has posted a short video of his Walking Dead LE machine here.  The included video is a longer video with game play.  Having played the pro version during the Flippers release tournament, it is good to see the color in the inserts on the LE version.  The pro version seems to have mostly clear inserts with very bright white leds under them which gives the playfield a washed out look.  It looks like there is a diverter above the stand ups on the left of the playfield.   This diverter can divert the feed of a right ramp shot to load the cross bow.  The cross bow then swings out from its position against the apron and has a shooting while aiming side to side effect like a Steve Ritchie cannon.

With the Flippers tournament coming up and no Walking Dead machine nearby to pump quarters into, this tutorial may be the best thing we have to figure out what the heck is going on.

Taylor and I had a chance to play it at the York show.  The shots are pretty  familiar and I remember a couple of tight shots on the right on the sides of the ramps.  It seems like it takes a long time for the ball to get all the way around the ramps and back to the Flippers.  It will feel pretty familiar to anyone who is familiar with modern Stern machines.

This is one of the first videos of The Hobbit pinball which was revealed at yesterday’s pinball Expo.  The reaction to the Smaug toy – which I think was promised to have an unprecedented level of interaction with the ball – seems pretty muted so far.  In this video, it looks like the mountain spins around to reveal Smaug when multiball starts and his head tracks the ball and his jaw opens and closes. 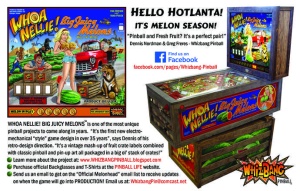 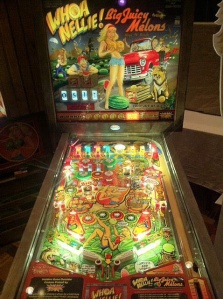 Behind the melons are a couple of boobs named Greg and Dennis!

I’ve been reading through the recent WNBJM thread and realized that there are some misconceptions and misunderstandings concerning the game. I’d like to address these issues and answer any other questions people may have.
Greg Freres and I set out to build one custom game. We had no programmers, no sound designers, no mechanical engineers, and no hardware designers. We’re just a game designer and an artist with a passion for pinball who wanted to do something unique. We decided to retheme a Continental Café because I had one that needed work and had a broken backglass. We combined our interests in old fruit crate art with ‘50s pinup art (and farming!) and created a unique cabinet and art concept for the game. It was going to be a one-off work of pinball art.
Using the parts and rules from CC, I designed a completely new playfield. This is not just a “reskinning” of CC. We changed it from a 2 player to a one player, eliminated two “Gobble Holes” and moved everything around. The game now has a shot back to the top which most EMs of that era don’t have. It also has two shots back to the pop bumpers. It also now has return lanes to the flippers which EMs of the era didn’t have.
Kerry Imming saw our functioning whitewood and said he could build a solid state system to run the game. At that point we realized it would be feasible to build more games. We found 3 more Continental Café games to use as donors for 3 solid state games.
We built ONE EM version of the game. There are a few more EM versions built by fans that now exist. We built THREE solid state versions using Kerry’s hardware. The playfield is screened playfield wood with a hardcoat. We think the SS versions are much more fun to play. The rules are slightly deeper and there is great music by Speedy West in the game and also some unique sounds. The game plays much faster and snappier than the EM version. There is great pop bumper action and the flippers are powerful. This game is a perfect example of two classic pinball design guidelines; One, “The ball is wild” meaning lots of randomness in ball action. Two, “Easy to understand but difficult to master.” If you can score over 2000 on a three ball game, you’re doing good. The highest score we’ve seen is around 7500.
Here’s my analogy comparing WNBJM to modern games: Today’s pinball games are like formula one race cars, the top of the line, fastest, most highly developed cars in the world. There are very few drivers who can handle these kinds of cars. They all learned on much simpler, more basic cars, usually go karts. Experienced pinball players have grown up with simple pinball games and have learned to handle today’s more complex games. New and inexperienced players are intimidated by these games and don’t know what they are supposed to do. WNBJM is like the go kart. EVERYONE can have fun playing it because it is easy to understand. It’s just plain, simple fun. Its design “levels the playing field” for all skill levels of players. We think it will be a great bar game.

Wired magazine has an article in the current issue about the current state of tournament pinball.

Check it out!  Wired

River City Flippers pinball resumes this Tuesday night in the Boocade!  Get ready!