The video below is the final game in the Boocade portion of the tournament.  This is a game of Fishtales between Taylor and Joe with Taylor taking the win.

With a possible 19 points on the line in this weekend’s tournament the race for second and third place is very tight. First place for the overall season is locked up as long as I can roll out of bed.

Convoluted but it works. 🙂

Today may have seen the biggest sign that pinball is back. In under 2 hours 400 people from across the globe signed up for the largest pinball tournament in the world. What took weeks to fill in 2013 filled faster than anyone could imagine. Registration began promptly at 12 noon today and I sat at my keyboard constantly refreshing hoping to land an early spot for nothing more than bragging rights. Glad I signed up when I did, with a server delay that seemed to take forever I was the 135th person signed up. Phew.

Chris and I are both planning our first pilgrimage to the hallowed halls of PAPA this spring. There is certainly no other place in pinball that I want to visit and I think that Chris feels the same way. I’ve been in the hobby about 9 years and this is really the first time that I have felt like I had to get to PAPA. I don’t what it is, could be the history of it rising from the soggy grave from the flood 2004 or getting a chance to see some of the greats donkey kick their way to greatness. There is an allure to PAPA that has a hold of me and this is my year… and I can’t wait.

So here is the deal with Pinburgh, you get to play a LOT of pinball. I don’t exactly know how it works and I am pretty lazy to reading in depth rules but one thing I know is that I am going to get to play a LOT of pinball and possibly some pinball with some of the top players in the world. What I do know is that Pinburgh is set up as a match play tournament. You are placed in either 3 or 4 player groups and you get points for how you finish on each table. You play for 2 days like this and that is used to determine what group you will be playing in and attempting to qualify for. So basically you’re guaranteed two days of competitive play against varying players, not too shabby.

Flip This 2013 was Taylor’s first wppr point tournament and was a success.  It was also my first try at videotaping a tournament.  I ended up running out of room so I was limited in the available footage. Here it is in all it’s glory. 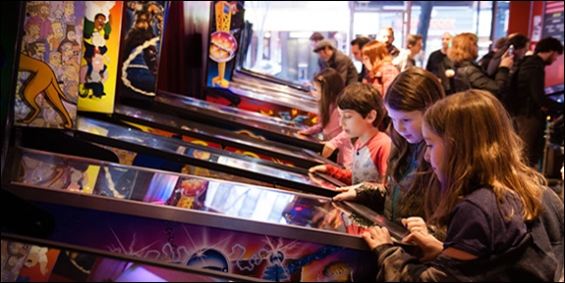 A couple of weeks ago, I was in New York City and had a chance to check out Modern Pinball NYC.  You can find them online at modernpinballnyc.com.  It is an incredible place for pinball.  I have never been to a pinball location that has as many excellent titles that are maintained the way Modern Pinball NYC maintains them.  Every game I played was error free, played very fast and was in excellent condition.  Modern Pinball charges on an hourly basis with all the machines set on free play.  I think the hour I played was around $10 which probably less than I would have spent on coin drops.

When I go to a place like modern pinball, I usually have a few titles that I want to play to get an opinion about and I also end up playing machines I already own. I end up playing the machines that I already own because I want to see whether or not my machines compare to machines that are in tip top shape.  I quickly realized that my Whirlwind flippers were not up to par.  The upper flipper shot on my machine has always required a perfect shot because there is not much flipper power.  When I made the upper flipper shot much more easily on the Whirlwind at Modern Pinball NYC, I knew I had some work to do.  I ordered flipper rebuild kits that night and rebuilt the flippers.  The machine is much more fun to play with the more powerful and more responsive flippers.

I played Iron Man and was convinced that my Iron Man holds up pretty well against a well tuned machine.   I played Fish Tales and I think my Fish Tales compares pretty well in terms of flipper power and speed of play.  However, the playfield seemed faster due to a good waxing.

When I went in, I recognized the guy who was working behind the desk as Alberto Santana.  I knew him from a youtube video where he plays a Johnny Mnemonic in an arcade.  I had heard that Modern Pinball was staffed by high level players and had seen posts on Facebook of them with customers and providing tips and strategies.  When I went in, he was busy and I didn’t want to bother him.  As I left, he stopped me and my wife and wanted to know where we were from and how we had heard about Modern Pinball NYC.  We had a interesting discussion about the machines and PAPA and tournament play.  He reminded me to sign up for PAPA on the day it opens up because it can fill  up fast.  He also told me that Modern Pinball NYC works hard to wax the machines and make sure that everything is working smoothly to make them as fast as possible.  Alberto told me that their goal is to have all the best arcade in america with public play machines that play like tournament machines.