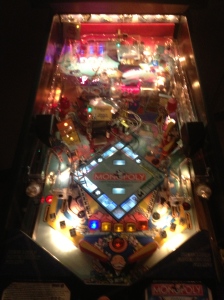 I bought this pin because my wife liked it at a pinball party we went to years ago. I am always looking for a table that will bring her to the dark side of pinball and this was my heroic attempt at doing just that, heroic in the sense that I added a table to the lineup that I could claim was a heroic attempt at bringing my wife to the dark side of pinball.

Monopoly was released by Stern Pinball in 2001. The game was designed by Pat Lawlor and of course utilizes one of the most iconic of board games as its theme. Theme integration is done very well as the player makes shots to advance their way around the play field.

The playfield seems very open but there is actually a lot to shoot for with four ramps, 6 pops, several saucers as well as a third rotating min-flipper. I don’t know what it is about this game but I really, really like it. I also think it makes for a great league or tourney table as the shots are very obvious and the game is very “playable” and by that I mean very responsive to nudges and passing. Strategy is pretty straight forward: advance around the board collecting all properties, once all properties are collected the wizard mode will begin which I believe is a timed, similar to the wizard modes in Twilight Zone and Safe Cracker.

I frankly have never sat down and read up on strategy for this game but there are  two MBs, one of which is the train MB which is accomplished by hitting a quick return wire ramp just above the left flipper. This ramp advances along the railroads in the game so after hitting it four times it starts a two ball MB. The main MB is achieved by use of a hard lock. Lock is lit once the player travels around the board game. Depending on the games difficulty both locks are available once the player passes go one time and then the right ramp is available to start the MB. Jackpot shots are accomplished by hitting the side ramp off of the upper right flipper.

Monopoly is certainly not a complicated game and with it’s iconic license it is probably one of the most approachable games in my lineup. There are certainly nuances to the rules that a seasoned player will enjoy exploring but the game is very “beatable” if the goal is to get to the wizard mode. Personally its is all about trying to bang out high scores more so than how “deep” you get into this table. Depth does not always equate to fun and Monopoly is certainly proof of that. Worth a couple of quarters in the wild.

Safe Cracker is the gem in my collection. It may not always be the most loved or most played but it is a special game that often gets overlooked by its bigger neighbors.

Safe Cracker was manufactured in 1996 and was designed by Pat Lawlor, designer of some of the most iconic games in modern pinball history. The game is a “token pin” and upon completion of certain game goals would dispense a token that could then be played for a special wizard mode called Assault the Vault.  Apparently there was a concern that the game would be used as a gambling device so apparently 800 of the roughly 1000 made were sent overseas. This would leave only 200 domestic examples making it easily the rarest example of a pinball that I have owned.

The object of SC is to play the pinball portion of the game and then break into the bank to play the board game which gives the player an opportunity to win a token. The pinball part of the game awards the player with items that will help the players journey around the board game. The play is timed so the number of balls is not set to 3-5 but will be determined by how long balls stay in play. A player could play an entire game on one ball or as many as was used while the clock still had time on it. This makes it for a bit of a tricky multiplayer game for the uninitiated but once people become more familiar with the ruleset it becomes a favorite in my lineup.

I first played SC at a local collectors house when I first got in the hobby. It was just such an unusual looking game that I was drawn to it. It wasn’t until 2007 when I attended the Pinball Expo in Chicago that I really got a chance to spend some time on the table. I participated in the team tournament and SC was one of the usable tables. It ended up being my go to game as I won every round it was featured. The game is quirky enough though that is was are undoing as a team member was unaware as to how the rules worked once in the board game and they chose to risk it to further advance in the board game than taking their loot and starting a multi-ball which would have easily won us the round and pushed us into the finals only to be beat by a couple of points. Ugh. And there it was, the next game that I had to have.

My hunt didn’t take long and I was able to find a decent table, well so I thought.

My game was in decent shape but had the common SC issues: bowed playfield, kickout wear and cracked ramps. At the time this didn’t mean much to me but after playing the game enough to get the feel for it the bowed playfield drove me nuts. There was also the slightest bit of wear at the vault.

One drag about SC is that the low production numbers made reproduction parts less viable for vendors so few parts were available. I was fortunate to pick up a spare playfield that I was able to get restored and cleared by arguably the best pinball restorer out there, Chris Hutchins. The intent was to do a playfield swap but with the lack of additional parts it sat on my wall for a while. Once ramps were made available I had to dive in and last year I swapped in the new playfield.  Another reason to finally jump in was the development of under playfield supports that stiffen up the playfield taking out the common bow. 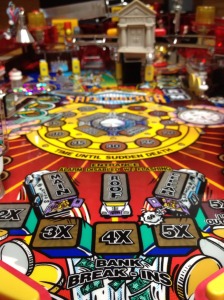 The playfield swap was a bear but the game turned out beautifully and plays fast and true.    SC is a game worth finding and checking out. Game play may take a little to get use to but once a person does it can take hold of you. The smaller cabinet and “wings” create an intimate pinball experience and really makes the player feel “in” the game.