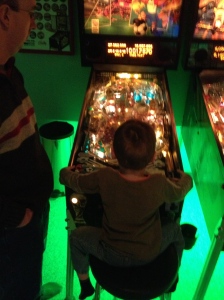 The attraction to this game by kids may be why grown ups don’t clamor up to this table but once they play it and figure out how much there is to do and how fun it is you’ll find parents patiently waiting for their kids to finish that “one more game.” Both my daughters love this pin and I don’t blame them a bit.

WCS’94 was designed by arguably the most artistic of famous 90’s B/W designers, John Papuduik. His titles include Cirqus Voltaire, Theater of Magic and Tales of the Arabian Nights, all three of which are aesthetically breathtaking tables. I have played all of his games and have owned CV. I personally think WCS’94 is the best of the tables and only for the theme did it not reach the heights of his other games. Fortunately this lack of interest in the theme has kept the game in the “affordable” bracket for years and has allowed people to stumble upon the game which rarely happens with a title that cost 3-6 thousand dollars. At 1k the game is a steal for what it is and would be my recommended table for anyone wanting to enter the hobby.

My game was routed and is easily in the poorest shape of all my tables having a small  amount of playfield wear by the right flipper. If the wear indicates anything it is the substantiation that this is one of the funnest pins to just walk up to and play. Wear often indicates neglect but in this case I think it simply demonstrates the utter playability of the title.

In WCS’94 the goal is to travel through the host cities until eventually playing Germany in the finals. Shots award ticket stubs that in combination will award the chance to collect travel by hitting the left orbit. Completing the skill shots will light the opportunity to collect three cities so should never be taken lightly. There are ample opportunities to score big on this game and there are several stackable modes that can create huge bonuses so keep that play tight as to not tilt away those 100s of millions to put your game over the top.

My daughters love this game so I keep the settings relatively easy compared to my other tables. Hearing them scream out GOOOOAAALLLLL is one of my favorite moments in the game room. The one issue with my game I need to look into is that it has weak saucer kick outs. I think it is just a matter of swapping in some new coil sleeves but the game plays decently and getting under the hood is my least favorite thing to do. Eventually.

So if you are looking to get into the pin hobby and need a pin with lots of playability that won’t kill your wallet WCS94 would be my first choice. It has certainly created more than one new player in my house, young and old.